The influencer marketing industry is projected to be worth $5 to $10 billion by 2020, but research shows up to 24 percent of influencers have falsely manipulated their engagement numbers.

A problem easily overcomed with data on IGCheck. Here are 2 basic graph patterns from IGCheck that can help you identify fake followers and fake engagement.

When content/influencers have a spike in their graphs, it could be because of a higly viral content piece or a highly relevant content being posted or something going viral (scandalous/promotional like a freebie). However, it this returns immediately to levels lower than their previous engagement that becomes suspicious. If the content that your influencer posts happen to have irregular engagement performance it's generally not because your marketer created a darn good message, it's likely someone paid for that fake engagement.

Spikes can happen on both followers/average engagement charts and are easy to spot. Look for spikes and go the the posts of those dates to figure out why that is the case. If an influencer has spikes that are real it may also mean that their audience only connect with very specific content. If you are doing a campaign with them, it will be useful to align with those content nature.

This graph pattern will require brands to combine content from multiple sources to figure out if your influencer is using automated/pseudo growth hacking methods to grow followers.

First when followers and following graphs trend in parallel, it is likely that they are followers are acquired using follow groups or follow for follow threads or pods on Facebook or Telegram etc. It is usually quite easy to tell and while this may not be a sign of "fake" followers they may not be genuinely interested in the influencer's content. 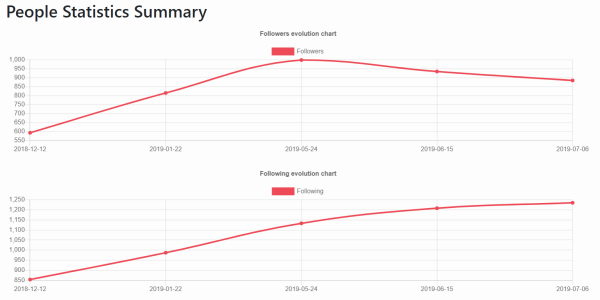 Often times the Follower numbers dip after the action as some followers are not genuinely interested in the content of the other party and were only doing it as part of the thread or pod they were in. This is often considered not an honorable action but still the problem exists.

The parallel follower/following growth is often accompanied by a dip in average engagement as followers are not interested and hence do not engage in the content of the influencer.

However over time the influencer will regain better engagement rates when uninterested followers drop out.

Ratings do not tell the whole story

There are many sites that rate and give percentage scores to influencers, however these are automated rule based methods of scoring influencers are don't tell the whole story. At IGCheck, we believe that by providing brands with a complete data story, they can tell that story themselves and find out if the influencer is a right fit for your campaign. If you don't have time to go through that data, a local media agency will be glad to do this for you while also creating the right campaign story.

If you are an agency interested in helping your clients identify the right influencers and avoiding fake influencers, IGCheck is free to use for up to 50 account reports, please contact us on Facebook for enterprise/agency use.